Nope, it's not an April Fool's prank, but on April 1st PLJ did indeed wrap his work in a major supporting role on the Tom Hanks film, A Man Called Otto. AMCO, based on Fredrik Backman’s best-selling Swedish novel and the Oscar-nominated adaptation, A Man Called Ove, is set for release by Sony Pictures on Christmas Day in Los Angeles and New York City and on Friday , January 13, 2023, in the rest of the country. . . . however, you'll be able to see AMCO even sooner if you journey to the Cinemark Valley View theater complex the evening of January 12th for a special red carpet advance screening of the film. Proceeds from the event - which includes a VIP reception, film screening, Q&A session with Peter, silent auction and a unique, commemorative piece of art for all who attend - will benefit the Charles & Margaret Jones Scholarship Fund at College Now Greater Cleveland. The event is sponsored by A.E.S. Management Corp. dba Popeyes, College Now Greater Cleveland, EDWINS Leadership & Restaurant Institute, Gloria K. Ritter, Artist and the Whiting Smith Family Foundation. Nearly two dozen other local organizations have signed on as event partners. To purchase tickets and for more information about the Charles & Margaret Jones Scholarship Fund, please click on the link below.
Purchase Tickets Here

SHAKER SPEAKS SERIES: FROM THE SHAKERITE TO THE SPOTLIGHT: A NIGHT WITH PETER LAWSON JONES, CLASS OF 1971

Each event, featuring notable Shaker alumni, is hosted in a Shaker Heights home. Tickets are $50 per person and must be purchased in advance. Only 50 tickets will be sold for each event. Details and locations will be emailed to all participants one week prior to the event. Funds raised will support access to experiences inside and outside of the classroom for all Shaker students.
Click here to register

Tuesday, December 20th starting at 11:30 am
Lunch served at 12 pm, Presentation at 1 pm
DoubleTree Hotel in Independence
Please join the Club to celebrate the winter holidays and enjoy the camaraderie of other local alumni. We are delighted to have Peter Lawson Jones as our speaker for this event. He will share the rather unique transitions he has made during his life's journey - "Act II: From Politician to Performer"
Register Here 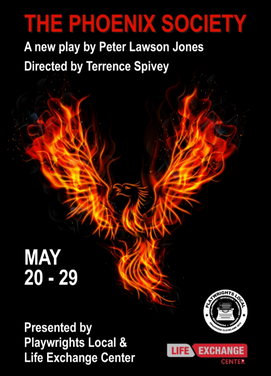 Peter's latest drama, The Phoenix Society, enjoyed its world premiere May, 2022, at Playwrights Local in Cleveland, Ohio. Will Coulter, the play's protagonist, is a widower with a teenage daughter who returns from the war in Afghanistan with a debilitating case of PTSD and depression as well as with a drug addiction, the severity of which he denies. He struggles to get and stay clean. Can a group of men and women - who, themselves, are battling mental health and substance abuse challenges - save him? TPS was commissioned by the Life Exchange Center, a nonprofit agency whose mission is to assist those who are in recovery from substance abuse and/or mental health disorders.

I don't know how you bid good riddance to 2020 and ushered in 2021, but Peter kicked off the latter as a guest star on an episode of NBC's long-running, hit drama, Chicago Fire. His character's story provides the pathos and is a focal point of the episode. Peter found it a particular privilege to have worked with Eamonn Walker (Chief Wallace Boden) as his primary scene partner and to have been directed by Matt Earl Beesley. You can still watch the episode on Hulu, Peacock, Amazon Prime, Spectrum On Demand and other streaming platforms.

If you have seen a Marathon Oil commercial that features a dapper gentleman tooling down a country road in a classic 1963 red convertible with a beautiful woman by his side, it’s PLJ. Shot in Ashland, Ohio, the commercial is still airing after nearly two years. Oh, and the woman next to Peter in the car is none other than his wife, Lisa! Watch the commercial below.

BREAKING BAD: ONE DEGREE OF SEPARATION

If you didn’t have the chance to appear in the immensely popular Emmy Award-winning series, Breaking Bad, then you should, at the very least, take advantage of the opportunity to perform with one of the show’s stars in another project. Peter did just that. Listen for him as attorney Paul Elliott on Voyage Media's Mahalo With A Bullet. The narrative podcast, adapted from Pigeon Blood Red - a novel by retired Cleveland-area attorney, Ed Duncan - stars Dean Norris, the rightly suspicious detective brother-in-law of Bryan Cranston, the twisted protagonist of the Breaking Bad series.  You can also hear Peter as FBI Special Agent Jack Kelly in another Voyage Media podcast, Murder in Rock Creek.  His third VM podcast, War Stories: The Short-Timer is in production.
Listen Here

Having served for nearly a quarter century as an elected official, Peter is always excited when the opportunity presents itself to marry his art and advocacy efforts. You may have seen him recently on Cleveland television in a public service announcement sponsored by a local nonprofit, Stop the Pain. The PSA offers a visually and thematically stunning anti-gun violence commentary which Peter conceived, penned and performed. Peter also appears in a video and can be heard on a CD (Fried Potatoes and Onions) produced by the Cleveland Treatment Center, which for decades has provided vital support and counseling for those battling substance abuse. In the video, he portrays “King Heroin,” in a novel and cinematic re-envisioning of James Brown’s classic 1972 jazz/R&B poem. In addition to "King Heroin," Peter performs a spoken word intro to a rendition of Harold Melvin and the Bluenotes's  “Wake Up Everybody.”  Finally, as a practicing attorney who strongly believes in everyone’s right to affordable legal counsel, Peter was proud to narrate The Legal Aid Society of Cleveland’s most recent agency video. Please click on the links below to view these three powerful messages.

Peter plays an eccentric custodian in the horror-thriller, Wormwood Rising, which screened last year in Cleveland, Ohio. Also, keep on the lookout this fall for the short, Dreams, in which Peter plays the father of a young man in uncertain as to his future path.

STREAMING SOMEWHERE OR AT REDBOX